If it has no in-game implications, it does not exist

This post is a continuation from an earlier rant on backstories and their detachment from actual gaming. Assuming my ravings reached a sensible conclusion, it might be formulated as follows:

If it has no rules-related implications,
it does not exist.

This is, of course, a bit of a hyperbola –character name is an obvious exception to this “law”– and I do enjoy the loose approach taken by most old-school products. But even if a dungeon is “solved” without any die-rolling or spell-casting, the core frame of rules remains, presenting the basic ingredients of any true challenge: risk and reward. Not once in my life have I been in a legal trouble, but it would be foolish to claim the criminal law has not affected my decisions. Rules are just like that—their mere existence compels certain type of action, even if they are never actually enforced.

Story elements and character personality, then again, rarely have any rules-related implications. Alignment is an epitome of this. It is nothing but a single word of vague meaning, sometimes accompanied by a blurb of kitchen-sink psychology. Yet we are assured it is extremely important, and it is usually mentioned in the same sentence with genuinely important statistics such as character class and level of experience.

Save for the Alignment, the Dungeons & Dragons character creation is of extremely mechanical nature. The process generates plenty of numbers and technical jargon—story, not so much. Some versions of the game encourage backstories and character motivations, perhaps even containing guidelines for creating such. In the end, however, these are just a separate form of yarn-spinning. The backstory does not communicate with those numbers on the paper. It is the RPG equivalent of a video game manual explaining how you got marooned on a hostile planet, alone but with a backpack full of shotgun shells.

Many OSR enthusiasts enjoy traditional character classes precisely because they are so generic. I used to adhere to this school of thought. Being a “Fighter” or “Magic-User” describes one’s ability in very broad terms, leaving matters such as personality or background open to interpretation. A Magic-User can be anything from a sage wizard to a hook-nosed witch to an insane scientist.

There is certain elegancy to that approach, particularly so if the campaign is challenge-focused, and a character is essentially just a chess piece who may be developed into a proper personage should the player so desire. Describing such characters solely from the point of view of ability is perfectly sensible; everything else would be gratuitous.

In practice, though, most OSR campaigns have a clearly defined setting and focus. Even the original whitebox Dungeons & Dragons, while superficially generic, has an implied setting suggested by level names, equipment lists, monster descriptions, and spell catalogues. Cleric in particular strongly alludes to a faux-Christian milieu of the witch-hunting vintage.

Assuming an OSR product is not intended as setting-generic, I see no reason why its existing elements could not be tailored to not only imply a setting, but to generate backstories suitable for the world. This idea is standard fare in story-games, but is rarely employed in old-school gaming. Even very setting-specific (and generally well-crafted) games such as Warriors of the Red Planet and Lamentations of the Flame Princess are usually content with nudging the existing archetypes slightly, rather than tailoring the character generation to support the setting.

If the rules define characters as “Fighters” and “Magic-Users”, then these definitions will also be true in the game world. A character will not ask: “What is your background? What kind of fellow would you describe yourself as?” He or she will ask: “Are you a Fighter or a Magic-User?”

In fact, the B/X tradition with its racial classes partially supports this type of story-building. If all non-humans are rules-wise characterized only by their quality of being non-human, then this very effectively leads to settings where non-humans are viewed as the Other, an exception to the norm, whereas humans are understood as individuals set apart from each other by their profession.

Even chess pieces are named evocatively. If a piece looks like a horse and is called Knight, then a story of sorts will emerge when it leaves the whereabouts of the King and Queen in order to strike down a hostile Bishop. This story would not even exist if an “L-Jumper” defeated a “Diagonal Mover”.

In short: rules-related definitions and concepts will also become de facto schemas inside the game world. Everything else will be forgotten as dictated by convenience and attention span. Any ruleset should take note of this fact and tailor its terminology accordingly.
klo tammikuuta 09, 2020

If it has no in-game implications, it does not exist

A character defined solely by mechanical ability will always remain that way. Pen a 1,000-page backstory, and Mr. Groh is still little m... 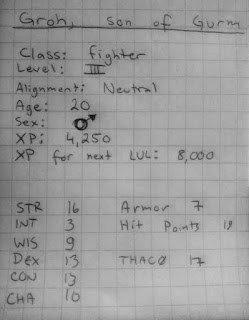